Last month,  I was invited to provide executive headshots at the 2019 Career Coaching Workshop for Veteran Women in Transition. This annual event is held in the Women In Military Service For America Memorial, also referred to as the "Women's Memorial."

I was both nervous and excited at the same time.

It was a little surreal for me personally because when I was in uniform, I attended the same workshop, as recent as last year.

I never thought then I would become one of the sponsors/vendors, let alone photograph 17 female Veterans in one day!

I asked my good friend, Raquel, to join me to help run the point of sales, she was perfect support since she herself is a Veteran and a successful businesswoman. I couldn't have done it without her.

The experience was more like a reunion. I recognized many of the faces from previous years and even photographed a few "Shipmates" and friends.


The highlight of the day, besides supporting my Sister Veterans,  was when I received a text from my friend, Maggie who lives in my neighborhood. Maggie is also a client of mine and a family member and strong supporter of our military community.

She text me a picture of a page out of the Workshop Program that featured an advertisement for my photography business.  I thought this was odd since Maggie wasn't attending the Workshop but then I realized why.  One of the pictures in my ad was of her youngest daughters from a photoshoot I did a few years back (don't worry I had her permission to use the photo!)  It's one of my favorite portraits.

Her text goes on to explain that her friend "Dave" had just received the picture of the ad from his daughter who happened to be attending the Workshop...yes the same Workshop. 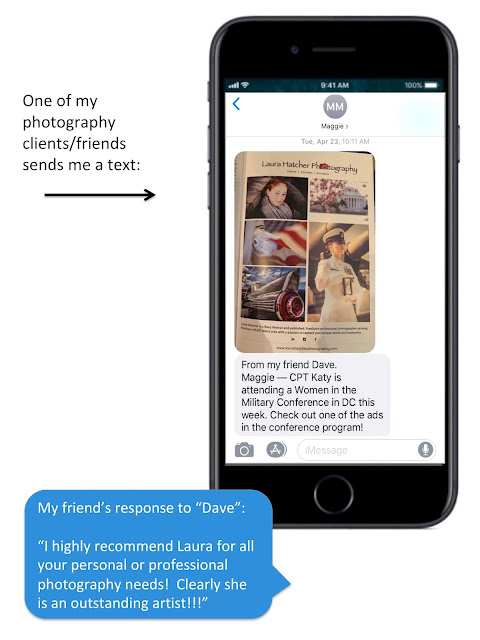 So what's the big deal you ask?  The daughter who sent the picture of my ad, is a US Army officer and West Point graduate, as was her father "Dave."

This family used to be stationed with my friend Maggie and her family in Hawaii, and Dave's daughter, who is now a military officer attending the Workshop, used to babysit Maggie's youngest daughter, now featured in my ad!  (Clear as mud?!)

I never had a chance to meet the young Army Officer,  Raquel said she came by the booth but I was super busy with my Veteran Sisters.

But Wow!  How serendipitous is that?  Just proves how small the Veteran community is, as well as the power of a photograph coming full circle.

Want to read a similar chance encounter I had with the Father of a Veteran?  Read my "Waiting for Ubers, Tigers, and Fishermen"  blog post from when I visited the Hawaiian Islands last February.

Like what you read?  Please hit the "Subscribe" link above to receive future blog posts via your email.

Laura Hatcher Photography
Welcome to my new blog, I'm on my second career after serving the US Navy for over 30 yrs. Now I'm seeing life through a camera lens and I'm amazed at how much I'm learning about my new place in the community and the world. The people, the details, the stories, wow, hope you find my journey just as exciting.